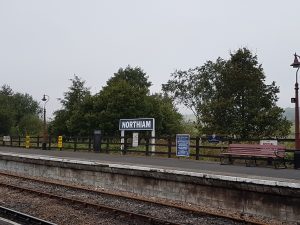 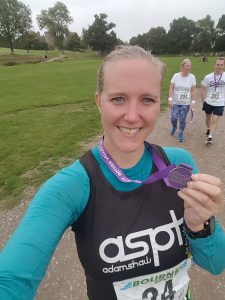 Taper week. never have two words looked so beautiful on a scruffy bit of paper than these! After three very heavy race weekends on the bounce, the realisation that I wasn’t going to have to do as much running this week was a joy to behold. It meant I could spend my Monday having a lie-in, resting my aching body with all its cuts and bruises from it’s weekend of OCR without feeling guilty.

In all honesty this taper week was more well planned than I could have anticipated as I have been shattered all week, to the point where twice I came home from work, sat on the bed to take off my work clothes and found myself waking up an hour later in that bemused state of “What year is this, what planet am I on?” that comes from an unexpected nap… and I don’t nap! I clearly needed a rest.

I made it a light training week, with just two Bootcamp sessions, and it’s fair to say I struggled with these, a bruised rib making some exercises nearly impossible and leaving me feeling a bit pathetic! I managed a couple of kilometres of running during these sessions but nothing crazy, so I should have been going into Friday well rested, but I still felt sluggish and tired.

Friday evening I travelled with the hubby to Rye Harbour for the first of the three races that make up the Rye Summer Series with a sense of trepidation. I had won the series last year but am well aware that my running is not where it was, I was curious to see, in race conditions and on this flat course, exactly how much slower I’ve actually gotten!

It was a really hot evening, as we set off out of the harbour and along the road, before turning into the nature reserve. The wind was fairly strong pushing back at you as you ran, and It was already feeling like a struggle, it felt like my brain was having an argument with itself as I ran, the pessimistic side telling me “You can’t do this, you’ll never make 10km, You’re already struggling” against the side of me that stubbornly refuses to ever give up “you’ve got this, don’t stop running, it doesn’t matter what time you do, just get it done”

The race directors had made the decision to move the water station from the end of the out and back course, to the 3km mark meaning you would hit it twice due to the hot conditions, and the hit of cool water was quite reviving. I had a bit of a stitch from the off and my knee was aching, I was being passed fairly regularly and really felt like I was struggling out to the 5km point. Round the cone and back the way we had came, I started finally to get into my stride, picked the pace up a bit and began to feel a bit more comfortable despite the heat feeling 10 times worse now the wind was at your back and not in your face. Back past the water station most of the second cup went over my head, as I started to pick a few people off again, turning into the final straight and finishing seconds after one of my bootcamp friends who I’d not quite been able to catch. After a quick breather I jogged to the end of the harbour and back to make up the 10km that my watch had clocked slightly short and ended up clocking it as just over 52 mins although my race time was less than this due to my extra little jog. This was 4mins slower than last year, which feels a little disappointing despite knowing I would be slower, but I had still managed a top 10 ladies finish and it’s given me a time to aim to beat next month!

I finished my week with a personal training session where we did a short run then lifted weights and had a really long stretch giving me a slightly shorter than planned distance for the week, and brought my well needed “rest week” to a close. This week no excuses, time to get back out on those long runs! 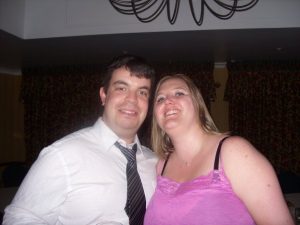 I always write about the races from my perspective, as that’a all I can really do, give my own opinion on the races I run, how I felt doing so and my own performance, and I don’t think I spend enough time saying quite how proud of this boy I am. He has basically lost a whole other adult in weight, he works so hard to improve his running and has far surpassed me. This year, having never done the distance before, he has run a marathon a month. In this one he was even the third fastest to run the marathon distance. He is simply amazing and my daily inspiration to keep pushing myself, even if it is a little irritating that I’m currently injured and resting and he’s still out smashing 10k in his lunch breaks not to mention how much faster than me he is now!

So now to business. This race is currently up there as one of my favourite runs! It was on a Monday, which is a little random, but I have Mondays off and Phil had some holiday to use up, and it was only an hour away so we signed up, and it was well attended for a random work day.

This race was a 4.4 mile loop, which was nice in itself as the past few lapped races we have run have been out and backs which can get a bit dull. It was on trail in Kings Wood in Ashford where we have done a run before, but this one was less off trail than the one we did here before, sticking to the woodland paths. I chose my new Inov-8 Terraclaws and they were just perfect for the job, not too aggressive on the grip for the hard packed trails and grippy enough for the short muddy section to keep me on my feet so I wasn’t losing time in road trainers slipping about.

I started off feeling really strong, my knee pain was very low, and the trails were lovely. Several up and downhill sections, and plenty of flat running in between through woodland trails. The sun was out, it was warm and just a lovely way to spend the day. I started out near the front of the pack, and was “playing tag” with another lady who I think was a bit injured so she would have taken me easily on a good day (then again i’m injured too, so maybe not), she came in seconds before me on the first lap, but to my surprise rang the bell to bow out, and easily taking fastest lady to do 1 lap. I continued onto my second lap still feeling really good and fresh, I felt like I was running at a pace I could maintain for ages, and I was now 1st lady with no competition, there was no one else near me!

I actually started to worry that I had missed a turning at one point, the faster guys were well ahead (including Phil) and I couldn’t see anyone behind me. I even slowed down to grab a quick pic! Thankfully I saw some guys coming up in the distance so knew I’d not gone wrong and soon saw the next marker. I came in after my second lap and helped myself to some jelly babies from the aid station before setting off for lap 3. This would get me a half marathon and was my aim for the day, pain allowing, but I was still feeling strong and considering a 4th lap as I was really enjoying the running, but at 11.5miles, part way through lap 3 the pain caught up with me, I had to slow down and started to struggle. I knew it would be stupid to continue. I finished my lap, and took 1st lady for the half marathon. I was sad that I couldn’t continue, just because I had enjoyed the course so much.

Phil was already out on lap 4 when I finished, so I got changed and started eating my body weight in cookies at the aid station while waiting for him to come back in. He continued to run getting his lap count up to 6 to get a full marathon, and the race director allowed me the honer of giving him his medal when he was finished.

Once Phil was done, changed and able to drive again we headed for a cheeky Nandos before returning home and getting started on our, yet again phenomenal, goodie bags from the race. We will certainly be back to do more events put on by these guys, we had a wonderful day. Check out their events here.