OCR. First I loved it, then I hated it, and now i’m somewhat indifferent. I hadn’t planned to run any at all this year, with the vague notion that I might do more in the future, maybe, but then Judgement Day announced that it was putting on it’s last race before getting out of the OCR game. I couldn’t let that go without doing one last race, as it is one of my favourites, so in the end, with a little encouragement from some friends I decided to go out with a bang and do all three distances they were offering over the weekend. I had a light training week, and other than a lack of sleep, was reasonably ready for the weekend of races. 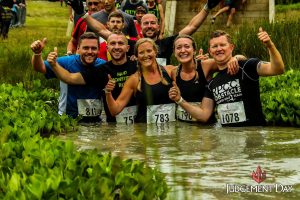 The weekend started with the 12km race, and I was lucky enough to find a group of friends who kindly allowed me to run with them, and we set off together to see what Judgement Day had to offer. The first set of obstacles were soon upon us after a short run, it was a hop over several low hurdles, enough to cause a short amount of queuing but then allowing the crowds to start to thin.  We were quickly looped back into the event village to wade through some muddy ditches then over an inverted wall, which I was pleasantly surprised I could manage alone.

Then it was off for another wade and then back into the trees for some trail running, and a nice refreshing lake swim. Being Pippingford we were treated to a number of hills, broken up with a few obstacles like a slackline over some stagnant water, and several different walls. At around the half-way point we came back into the event village for our first attempt at the rope climb, before veering away from the finish line to a hang tough then once again back into the trees and trails of Pippingford.

The second “half” of the 12km run was much tougher than the first, with even more technical running, a horrible cargo net climb out of water onto a bridge, that although I managed without much of an issue still caused a bit of an “I don’t like heights” wobble. Crawls through tunnels and another swim and a sandbag carry that was long and heavy, tracing out a “JD” on the hillside and left my shoulders wanting a divorce. At the end of the sandbag carry we were just over the 12km mark, and it was a short run down to the rope climb again, with a wall thrown in before hand, and then this time it was across the line.

After a quick change of top to avoid getting cold, and a bit of a chat with the people hanging around, I said goodbye to my running buddies of the morning and stacked up again on the start line ready for the 6km race.

The 6km race was the first loop of the 12km race I had already run. I started off caught up in a large group of Mudstacle fun runners, but soon decided this was far too slow and so weaved my way out of the crowds and pushed on alone, quickly finding myself clambering in and out of the muddy ditches by the event village again.

back across the lake, round the pretty trails, over the slack-line, over some walls and it seemed like no time at all before I was heading back down to the rope climb again. This time my attempt was even poorer than the morning as I failed to get my leg wrap right and haul myself from the ground, so I gave it up and headed to the finish line to collect my second medal of the day.

After hanging around for a bit of a chat after the two races it was time to head home, after the decision was made earlier in the week not to camp, since Pippingford is reasonably close to home. In the morning we would return for the final race, the 18km big one.

On Sunday morning it was another early start out to Pippingford, where again I was lucky enough to have a group of people to run with so I wouldn’t be facing the 18km alone. Again I was stood at a start line, this time already feeling achy from the day before, a few cuts and bruises already making themselves felt, but we set off at an easy pace and it was feeling OK.

The first 12km was exactly the same as the day before, but felt more challenging due to how tired my body was from the previous day of racing. Despite feeling OK with the running to start with it soon became obvious that I wasn’t as capable as the day before. When we got to the cargo net my arms had so little strength left that I was struggling to hold myself on the net, my arms were sagging and my body hanging low instead of close to the net. As I got higher my arms were giving up, and I was getting scared, I felt like I couldn’t hold myself up  and I couldn’t get off the net onto the bridge, I was crying and getting into a blind panic. Thankfully my friend Chris was there at the top, and he and the marshal got hold of me, held me to the net and helped guide my foot onto the bar at the top of the bridge, almost lifting me off the net to safety. The marshal grabbed me in a huge hug as I sobbed and shook. I wish I had asked her name as she was wonderful. With her help along with the boys I was able to get going again, walking up the hill straight after until I had stopped hyperventilating.

Once at the top it was a set of monkey bars, I’d got a little less than half way on the Saturday, but this time I made it to half way exactly before falling into the waiting water bellow. Sense of humour restored we continued with our run. The sandbag carry felt even worse on shoulders already sore from the day before but I actually did it quicker, and soon we were heading back towards the event village again, this time though rather than going down to the rope climb we were diverted back onto the original 6k course making it the 4th time I had run this section in 2 days. As we moved round the final 5km or so I have to admit I was beginning to get a bit bored. I was still enjoying the trail running but I just couldn’t be bothered with climbing the same walls and things AGAIN.  There was an addition of a keg carry towards the end of the loop but otherwise it was all feeling a bit repetitive.

I was pretty pleased to come to the final rope climb, another failure on my part, and then linking arms with the boys who had been my constant companions for the last 18km we crossed the line with smiles on our faces.

We went to get ourselves changed and dry, and I headed back down to the event village to say some goodbyes. As much as I feel that I didn’t really need to do the 18km after doing the 6km and the 12km the day before, I’m still glad I did it and saw this race out properly.

It felt pretty emotional both days when it came to leave, saying goodbye to people who have become a part of my life over the past few years, as it started to dawn on me I may well not see many of them again, as with the end of JD I also think its the end of my OCR days, unless someone really needs a running partner for one, I think I’ll be sticking to the roads and trails in future. OCR will always have a place in my heart, for giving me a hobby I loved, for teaching me I could do much more than I thought I could, for giving me so many great memories that I wouldn’t trade for the world but mostly for introducing a shy girl like me to so many amazing and wonderful people that I would never have met otherwise. So it’s farewell to Judgement Day as an OCR, a race that will be very much missed by so many, with a massive thanks for the memories!