When I put together my plan to run a Marathon, I knew I wanted to build up slowly, and put in an interim goal of a Half Marathon, and this interim point has come around very quickly.

Not only was I attempting my first half marathon for a number of months, but I was also running a 10k the day before, and being a Brutal Run 10k, it wasn’t going to be the case of a gentle plod on some flat roads! 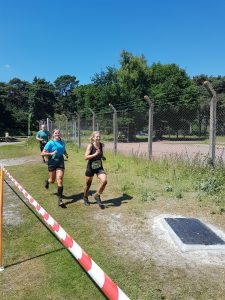 It was a scorching hot morning, we were sweating just waiting to start, and looking forward to getting going and into the trees at Congo woods where the race took place.

I was running with my friend Jayne again and we set off together around the starting field then gratefully entered the shade of the trees.

The course was brilliant, lots of mud, that if you trod in the wrong place could see you sunk in up to your waist, and several water crossings which were bliss in the heat, helping to cool you down. The best part of the course was towards the end of the the 5km lap, where you were directed into a twisting and turning downhill trench where you could just let go and run, slaloming down the hill. There was a lot of really pleasant woodland running, and the elevation wasn’t too crazy, the worst parts of the race when you had to come out from the cover of the trees and run across open ground with the sun beating down.

I had a couple of near misses where I tripped on a root and nearly fell flat on my face, but managed to stay on my feet both times, and I caught my weak ankle towards the end of the first lap, sending pain shooting up my leg, I’d spent so long lately worrying about my knee I forgot I have to be careful with my ankle too! It didn’t feel like a bad twist so I carried on, but once I was finished and had my shoes off it started to feel very painful, not ideal with a half marathon to run the next day!

we hung around in the sunshine for a while, then I headed off with my hubby to find food and beer! We also did a quick stop off at a supermarket to find me a bandage to strap up my ankle. Finally we got ourselves checked into our hotel for the night, took a little walk along the canal right outside, then turned in for an early night.

The day dawned hotter than the last, hitting the 20s before 10am, a heatwave was not what I had in mind when planning this weekend of races. This was another step up in distance, and I had several things to concern me before the start. My ankle was sore, but seemed OK once strapped and tied tightly into my trainers, my ability to cover 13.1 miles in one go was by no means certain and now the heat, which was quickly becoming my biggest concern of all.

The race had three distances on the day, a 5k, a 10k and the half marathon. The organisers had sent out an email before when the weather forecast showed the expected high temperatures saying that you could drop from the half marathon to the 5 or 10k if you wanted to due to the heat, and as this race contained several split points and for the half marathon two laps of the larger part of the course there were opportunities to drop down if necessary. For the health and safety of all runners and marshals they also introduced a cut off time for starting the second lap of 1h30.

Thankfully a large part of the race was run in the trees, so there was plenty of shade. As someone who hates running encumbered with anything, even I conceded that I needed to take water with me. It was so hot, running was really tough. I set off slowly, trying to ignore my instinct to go off quick and get out of the pack, most of the people around me were doing the 10k anyway (different colour numbers). I wasn’t sure I was going to be able to do this in the heat, the distance was intimidating me, so I decided just to play it by ear.

At points in the course there were lots of people around, then the course would split and you would be more or less on your own before re-joining the main route. This meant I found myself overtaking the same 10k runners several times.

The course was actually really nice, through some lovely woodland near Fairoaks airport and the McLaran Technology Centre. It was just so hot. There were three water stations on the main loop, which allowed me to conserve the water I had with me, and allowed me to chuck some over my head to cool me down too.  The woodland paths were nice and shady, but there was also plenty of running through fields where the heat hit you like brick. I found myself half hoping I’d be too slow to start a second lap which started at 10k in, but I made it in plenty of time and directed my already tired feet off for lap two. Now there were just that half marathon runners out there and we were so split it wasn’t unusual to be running without anyone else in sight. I passed a young marshal at the 12k point who told me I was the 4th woman. I was surprised as I was just plodding, but I couldn’t see anyone else around me so I continued to just plod. I came to the next water stop and cracked a gel, the marshal kindly re-filling my water bottle for me, when a woman appeared out of the trees behind me, and a competitive streak that I thought had died flared up in me! I had gone into this not bothered about time or position but suddenly I wasn’t giving this up! I shot off into the trees and decided to try and pick up the pace while I was in the shade. This worked and I never saw her again. It stopped me slowing down and coasting the second part of the race.

As I was approaching 17km, after another water stop, as we ran by a shallow river in an open field I saw some other runners up ahead, one a woman. I didn’t think my tired legs would allow me to catch them but slowly and surely I caught up, overtook, and suddenly found myself in 3rd. If I could hold her off for just 4km I would podium!

I tried to keep my pace from dropping, but I could feel the heat taking its toll. I had to allow myself to stop and walk for a bit before running again, but I’d got far enough ahead that I couldn’t see anyone behind me again. My clothes were actually soaked in sweat and I was exhausted, but I ran on slowly, having to stop and walk every so often. It felt like my feet were dragging but I was so nearly there!

I came to the split point again finally, after a hot slog through another open field, and then it was along a path, across the airfield and then a short run down to the finish (we had walked this bit to get to the start line earlier in the morning) I knew exactly how far I had to go, but I still couldn’t run the whole way, the heat was getting ridiculous now. With half a kilometre to go I came across a man who had collapsed in the heat. He was being ably assisted by a marshal and another runner and they told me to carry on and get to the finish, there was nothing I could do to help, so I carried on, even now not able to run the whole way but walk-run-walk-running to the final drag. I managed to run down the final stretch and across the line, remaining in 3rd place. I was so happy to be finished!

I started looking for my husband, who should have been finished long before me, but I couldn’t see him anywhere, I checked the car, went back to the main field, but he was no where to be seen. Suddenly he came running up from the direction of the cars with another lad, turns out he had gone the wrong way, got lost, run an extra 2km and needed to cross the line still (even if he was coming from the wrong direction)!

Normally we would soon head off from a race, especially as we had quite a drive home, but the heat had got to us both. I felt really sick and unwell, Phil wasn’t much better. It took us a while to feel up to going and getting changed, and finally heading home, but I was feeling worse and worse so we soon stopped again at some services where I forced down some food and had a cold drink, which finally started to make me feel a bit better!

With a little time to reflect, I’m very proud of this achievement, and by that I mean managing to complete a half marathon in those conditions, the 3rd place a small bonus, but I wouldn’t recommend running in that kind of heat!

Week 10 done, and with another race next weekend (a lapped one where I’m hoping to complete in the region of 30km) I can only hope for maybe a slight drop in temperature before then!