Some races are not about time, or pace, but about getting out in the fresh air, with good company and just enjoying the ride, and that is exactly the way I was approaching this race.

I had convinced my friend Viki to sign up and run with me, and I know she was a bit nervous about the distance, having struggled to find time to train lately and suffering a few injury niggles, however she still wanted to run, and we agreed on a slow gentle run.

It was an extremely cold, with the temperatures barely above freezing, but the sun was shining and the rain that had been prevalent the day before was no where to be seen, which actually made it lovely conditions to run in (once the feet had defrosted!)

The race started at the top of a hill, then headed down onto the forest paths that make up Bedgebury Pinetum. My all terrain trail shoes were perfect for this run, as we started on grass, but were soon running on a variety of paths from proper paved surfaces to ankle deep mud on woodland trails.

As we made our way around the first lap, which made up the first 10km of the race, I was reminded of how lovely a place to run Bedgebury is, having done a race here once before, and also visited a few times to do the Go Ape course they have up in the trees. It’s very scenic, with no traffic, but you do have to watch out for bikes as there are several well marked bike trails that are popular with cyclists, and also the odd horse!

The latter part of the first lap took us through Bedgebury’s Gruffalo trail, before being directed away from the final hill off to complete a second lap for the people running the half marathon.

Viki and I were having a lovely time, chatting away and jogging along nice and slowly, having to stop for a walk on some of the more mud laden paths as Viki’s footwear couldn’t cut it against the slippery paths! No one could accuse us of running too fast,and we were definitely near the back of the of the half marathon runners, but we didn’t care.

As we made our way around our second lap it became clear this race was going to come up short of the advertised distance, my GPS watch consistently beeping off the miles about half a mile after we went past each of the mile markers. I knew this would be irritating my husband, who was far ahead of us (actually he came 23rd!), but since we were not looking for a fast time, Viki and I weren’t too bothered.

As we turned up the final hill back towards the start line, Viki’s young son Chester was there to cheer us on, and began running up the hill behind us, so we took his hands, and he ran with us the rest of the race and over the finish line.

It had taken us almost 3 hours to complete this race (I wasn’t kidding when I said we took our time!) and in the end I clocked the race at about 700m short (which is a lot, even if we consider the inaccuracy of GPS in the trees). We had a lovely run on a sunny Sunday though, finishing with a very smart medal shaped like a pine-cone, and are looking at going back to run the 10 mile race hosted there in February. All in all a great way to spend a chilly Sunday morning. 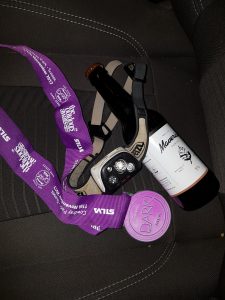