Having struggled lately to follow my training plan and get out for any significant runs on my own, the Twilight Chase lapped race put on by We Run, They Run, I Run felt like quite a significant race in the final build up to the Marathon, a real chance to get some distance in my legs and build some confidence.

The race was a 6 hour lapped challenge event, finish one lap and you’re a finisher, do as many or as few as you like in the time limit. It was set at Rye Nature Reserve, where we have run lots of time before, and started at 4pm on a really windy Saturday. My plan was to run 4 laps, which would give me somewhere around 17 miles of total running.

We set off at 4pm and headed onto the reserve, a simple out and back lap of 4.4miles. The first outward leg was alright, I was actually running a bit quicker than I had intended so I slowed down, but was feeling OK up to the turn around cone, then wham! The wind! It smashed you in the face and drove you backwards. Suddenly running was infinitely harder, my pace dropped to a crawl, I just couldn’t handle it! I struggled back to the start to get my band marked and wondered how I was going to manage that another 3 times!

After some jelly babies I set back out, already feeling pretty demoralised, and my bad knee started to ache, along with my hip, I was going so slowly and dreading the point where I would have to turn around into the wind. I reached the cone and it had got no better. I started the slog back again. I felt ready to give up as I loaded up on more sugar to try and increase my energy levels, but decided I needed to get at least one more lap in, to give me a half marathon for my efforts. I set off on the last lap and just after I turned around again the rain started. It was bleak! There was some sun valiantly pushing through the clouds though so I turned around, and there was a full on rainbow behind me. I stopped running and pulled out my phone to grab a snap. It might have been bleak, but it was also beautiful! 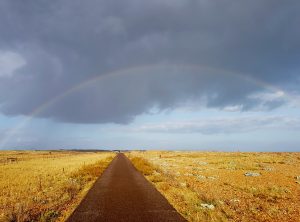 When I got back for the third time it was clear I needed to call it a day. I’d run a half marathon but was short of the distance I had wanted to run. Far from building my confidence, it was severely dented, how will I ever managed to run a full Marathon?

In the end I wasn’t the only person to cut their run short, the conditions were taking their toll on everyone, it was the toughest time I have run at this location, including the time I actually did run a Marathon back in January, but that didn’t much help my state of mind. I was extremely disappointed in myself.

The day after this disappointing run I went for a few days break in the New Forest to recharge, during which we included a trip to Bournemouth to scope out a little of the Marathon route, then spent the latter part of the week celebrating my birthday with friends and family. I managed to get in a few runs, including a beautiful 12km bimble through the New Forest, but my running total for this week was another low one.

There are now 6 weeks to go before Bournemouth, and my plan is to get in one long run each week for the next three, then taper back down before the big day. This game plan includes sorting out the nutrition side a bit, and cutting out the drinking! (A friends hen-do and wedding not withstanding) 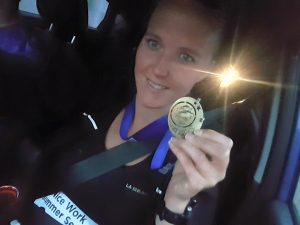 Why do I always feel like I’m messing up? I swear I used to have will power, and drive, but today I feel like a lump, lost with absolutely no motivation. It’s not a new feeling, I don’t so much as slide off the wagon from time to time as go flying off and smashing into the road with the force of a nuclear bomb, and this has been a particularly bad slip. Sometimes it’s the exercise and sometimes it’s my diet but this time it’s both.

Sometimes you really need some support and help, I keep thinking about how I’ve got to get up and out of the door, Bournemouth is looming (2 months to go) and I’m not conditioning my body like I should, it’s been a battle at times, but when I’ve dared to voice it on social media I actually felt attacked not supported, so I just shut up.

So despite my meticulous training plan, and intent to get my diet back on track, for the past few weeks I have been failing. I’ve got no excuses other than laziness and a complete mental collapse, and the upshot is I no longer believe I can do this, not the marathon, not improving my fitness, not fixing my diet, and I feel like I’m already halfway down the slope that leads me back to the fat girl I was before, who is still screaming to be let back out, at the moment my inner fatty is winning…

Or at least she has been, but I’ve decided to sit down today and look again at my training plan, and try for the millionth time to get myself motivated, training hard and eating well again. It feel’s like such a struggle at the moment though, and half of me just thinks I should give in a get fat again but the other half of me, the half that hates what she sees in the mirror, really wants to find a way out of this funk!

On the training side, week 14 was OK and I clocked 40km of running, but the following week I only managed to put down 10km of running and very little training, I managed to up it to 34km in week 16 mostly due to a random good day allowing me to actually put down a long run in the week, then week 17 I dropped down again to 23km for the week.

So this week my plan is to put down at least 30km, then get back on track with the training plan in earnest. I plan to try and start sorting out my diet again, excepting that It’s the summer holidays and I have plans that sometimes make this very difficult so I should cut myself some slack, and most but hardest of all, I’m going to try and start believing that I can do all this again!